Do you think of pumpkin pie as a dairy dessert? I'm saying yes because besides pumpkin, one of the main ingredients in the recipe I use is evaporated milk.  Evaporated milk is dehydrated milk made by removing sixty percent of the water,then homogenizing,canning and sterilizing for a shelf stable product.

Evaporated milk has been considered a staple ingredient for kitchens since developed in 1890 and was a great addition to kitchens before home refrigeration was common. Pet Milk was one of the first brands of evaporated milk in the United States and the one I remember in my own grandmother's kitchen.
Evaporated milk:

Mix sugar,salt,cinnamon,ginger and cloves in small bowl.Beat eggs in large bowl.Stir in pumpkin and sugar spice mixture. Gradually stir  in evaporated milk.
Pour into pie shell.
Bake in preheated 425 degree oven for 15 minutes. Reduce temperature to 350 degrees;bake 40-50 minutes or until knife inserted near center comes out clean. Cool on wire rack for 2 hours.Serve immediately or refrigerate. 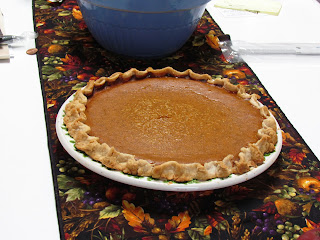 When you add that spoonful of whipped cream or ice cream to the piece of pumpkin pie, I consider that a double dairy dessert!
Posted by AnglinDairy- Spotted Cow Review at 10:26 PM