Even though it has rained enough in Northwest Arkansas to green up the pastures and allow us to plant fall crops, we are still dealing with the effects of drought on our pastures,ponds and cattle. On our dairy  farm, the pregnant cows that are resting in the pasture waiting to give birth (also known as dry cows) enjoy a balanced diet that includes grain,eat hay from a hay manger, and graze on the pasture grass. The drought has created extreme shortage of pasture grass for grazing and in some cases, fifty percent loss of pasture grass.

With little grass to graze on since early summer, the dry  cows were standing for hours around the hay manger eating hay. When some of the cows began to develop problems with their feet, it became obvious that standing for extended periods of time was creating sore feet and lameness. We started drought grazing in July to limit  standing around the hay manger by unrolling a large round hay bale on the ground to allow the cows to eat the hay as if they were grazing.

Animal care is one of the most important aspects of a dairy farmer's job. Resolving problems that create lameness is important to the health of each dairy cow. Lameness decreases feed intake which in turn can decrease milk production,create other metabolic disorders, and increase reproductive problems that can lead to the need of removing the dairy animal from the farm. 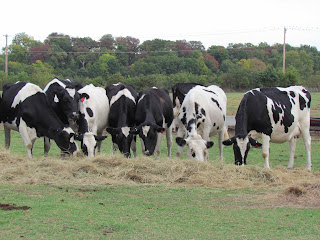 Since beginning drought grazing, I'm not sure we have fooled the cows but
drought grazing is preventing lameness and keeping our cows healthy!
Posted by AnglinDairy- Spotted Cow Review at 8:46 PM 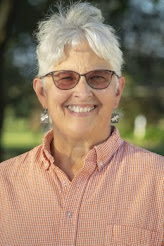