The fog thickened as we were feeding calves this morning.
As I looked at the cows resting in the pasture, it was beautiful in an odd way.
For me it was  a  moment of peace in a crazy week. 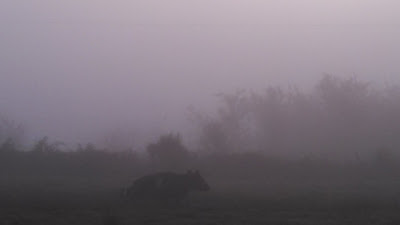 I'm thankful for the peaceful God-given moments
down on the dairy farm.

Posted by AnglinDairy- Spotted Cow Review at 7:02 PM No comments:

Happy Fall,Y'all!
I love these seasonal transitions down on the dairy farm.
Even though  there's a little bit of farmer frenzy as they
work to finish harvesting the hay and silage crops before winter,
I'm thankful for the abundance of hay that will
feed our cows and calves this winter, 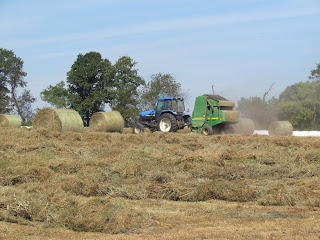 the cooler weather for our calves, 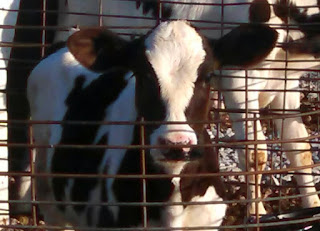 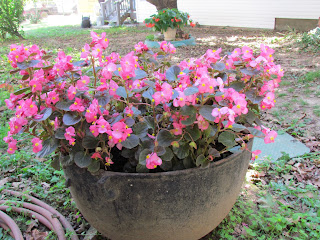 the beauty of summer flowers that brighten the fall days.
Posted by AnglinDairy- Spotted Cow Review at 8:43 PM 1 comment:

Kick Off Fall With All-Star Breakfast

Last month at the Arkansas Women Bloggers Conference,  I received a gift box filled with a variety of rice products from  Riceland Foods. All that rice in my pantry has given me the perfect reason to enjoy and celebrate  National Rice Month and the fact that Arkansas is the number one producer of rice in the United States! 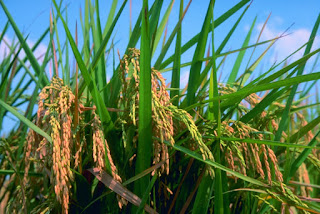 You can find a wealth of information about rice production, how to use the different rice varieties and a great collection of rice recipes at Riceland.com.

One of our favorite ways to eat rice is with milk and sugar either for breakfast or as a sweet treat.  Milk and rice make a great nutrition team. All-Star Breakfast Rice  is perfect for fall's  kick-off during National Rice Month! 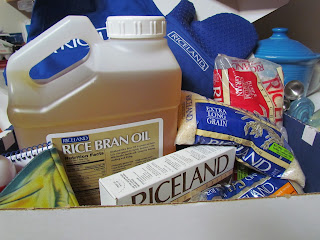 *Or use sliced peaches or bananas if desired

As I watch  these beautiful Holstein cows grazing in the pasture, I am also reminded that
my dairy farm  family and I are working everyday
to produce nutritious food for hungry people.

Food security is a shared responsibility
that dairy farmers commit to seven days a week. 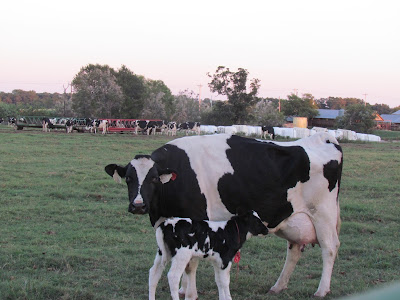 I'm thankful that dairy farmers across the nation partner with Feeding America,
the Academy of Nutrition and Dietetics and the National Dairy Council to help
fight hunger in America and promote healthy food choices
not only during Hunger Action Month but throughout the year.

Posted by AnglinDairy- Spotted Cow Review at 4:29 AM No comments:

Benton County Farm Bureau provided a little bit of fun and information about Benton County agriculture to   hundreds of people at the Bentonville Farmer's Market this past Saturday.
Basically, we were marketing farming.

Consumers of all ages enjoyed the beauty of this antique tractor and a lot of
tractor talking from Benton County farmer Bob Shofner, 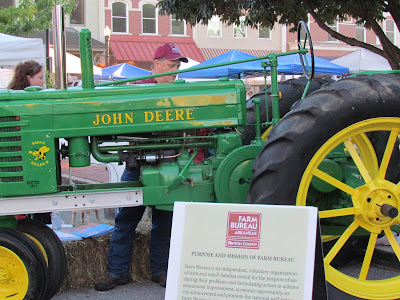 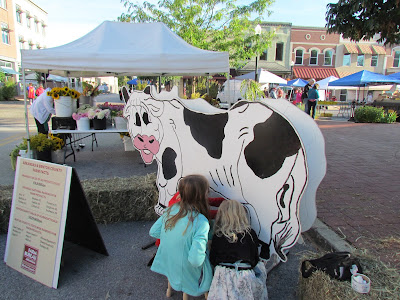 and
petting the  chicks. 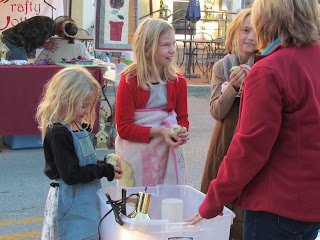 It's not a hard job to market farming because
we have a great story to communicate at every opportunity.

It's obvious that the look of the family farm and the technologies
have changed but we have the same values of caring for the land
and the animals to provide safe,healthy food for America's consumers.
Posted by AnglinDairy- Spotted Cow Review at 9:48 PM No comments:

Labor Day,like all the other days of the year,
found  us busy with the daily chores of feeding calves, 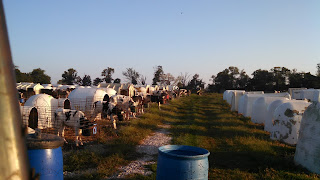 milking and feeding the cows, 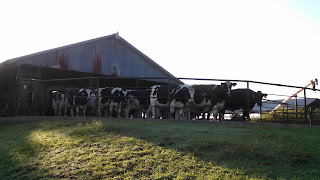 and
welcoming a new calf to the farm. 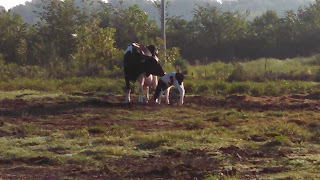 I'm thankful for the opportunity we have to labor everyday together as a family
down on the Arkansas dairy farm.
Posted by AnglinDairy- Spotted Cow Review at 4:59 AM No comments:

Hot Springs was the meeting place last weekend for the fifth
Arkansas Women Bloggers Conference.
As a blogging member, I've attended four conferences and made sure to
attend the food blogging option called Foodie Friday.
As part of this year's Foodie Friday, women in agriculture provided
information about our involvement in food production in Arkansas. 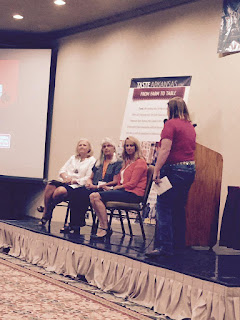 I'm thankful for any opportunity to share information about agriculture,
to see the passion and dedication of other women in agriculture like Lori and Donette, 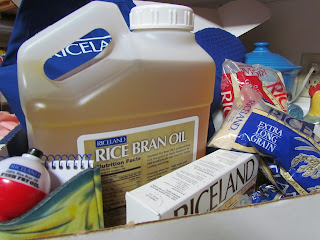 to enjoy the products produced in Arkansas
generously give to us at the conference,
and 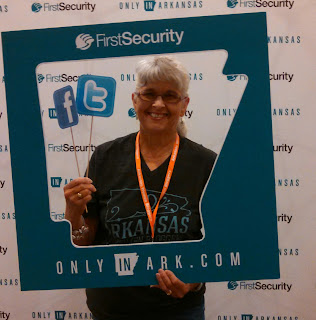 to be inspired by the group known as
Arkansas Women Bloggers.


Posted by AnglinDairy- Spotted Cow Review at 4:33 AM 2 comments:

Have you been to a Feed the Funnel Party? 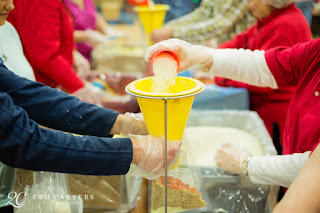 If not, you really need to put this on the top of your bucket list, especially if you want to make a difference in the fight against hunger. The Pack Shack of Northwest Arkansas provided the opportunity to feed the funnel and pack meals during the Arkansas Women Bloggers Conference this past weekend.

After removing loose jewelry, washing our hands and donning hairnets and gloves, we were assigned to stations on an assembly line to measure,funnel and seal a  bag of  ingredients.  Bags of  Cheesy Rice and Vegetable Soup were carefully boxed for distribution  to our hungry Arkansas neighbors in  Hot Springs and Siloam Springs. With a lot of loud music, unbelievable dance moves from several of our rock star women and organized  assembly  labor,  we packed 10,300 meals in just a little over an hour. 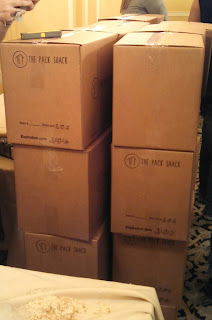 Arkansas has more than 200,000 children that are considered food insecure. That is reason enough to have Fun at the Funnel!

I challenge you during the month of September--Hunger Action Month--to Feed the Funnel or participate in other activities  in your community to fight against hunger.

Posted by AnglinDairy- Spotted Cow Review at 4:39 AM 1 comment: