I can't think of a better way to kick-off June Dairy Month than getting to taste  delicious recipes made with a variety of dairy products at the Arkansas Farm Bureau Dairy Foods Contest in Little Rock. It truly is a dairy paradise of good eating!

Recipes are judged on the use of dairy products, originality,the availability of ingredients and preparation and  serving technique. It's always fun and rewarding to observe the contestants, who can range in age from 9 to 19, preparing their recipes for the contest.  As a Farm Bureau member I take pride in the programs that support the development of our young people because it's obvious that each one has learned a variety of life-long skills by participating in this contest.

Congratulations to this year's winner of the Party Idea category  Emma Williams of Searcy (White County). She described her recipe as a mixture of all the foods she loves. When you taste this pie, you will definitely agree it's a bit of dairy paradise! 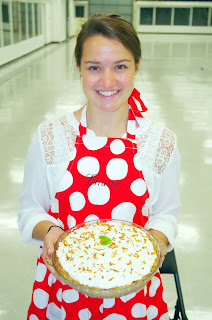 Crust: Mix cookie crumbs, 1 cup coconut and melted butter in a small mixing bowl and blend well.
Press into a pie plate to make crust. Bake at 10 minutes at 325 degrees or until lightly browned.

Filling: In a large mixing bowl, combine milk and vanilla pudding and whisk until stiffened. Fold in 1 cup coconut and sour cream until blended. Set aside. Arrange sliced bananas on the bottom of cooled crust. Cover with pudding mixture; Set aside.

Topping: Combine whipping cream in a bowl and beat until stiff. Add sugar and continue to beat until mixed. Fold drained pineapple and prepared whipping cream together, spoon over the pudding mixture of the pie and sprinkle with toasted coconut.

Posted by AnglinDairy- Spotted Cow Review at 6:21 AM