It looked like Saturday morning was the day,
an August Hay Day.
I could see the determination on  my son's face as he prepared
the machinery and moved to the field.
No matter what, hay cutting was happening.

If you drove across Northwest Arkansas on this August Hay Day,
it was obvious that many farmers were feeling that same determination
with hay fields mowed or in the process of being mowed. 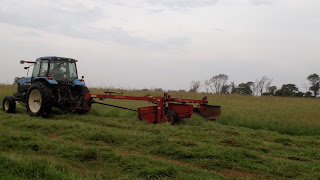 We've been waiting for nearly two weeks for the prediction of
scattered rain showers to move out so hay harvest could begin.
Drought conditions during April and the usual hay cutting
months of May and June, have created a hay shortage for
farmers across Northwest Arkansas. 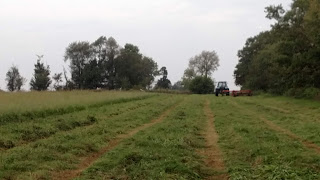 It's the unexpected rain in August that has made our
makin' hay when the sun shines  possible.
It's even possible that August rains will produce enough hay to
replenish what was lost in our  first cutting.

That calls for a celebration down on the dairy farm
--an August Hay Day!